Prof. Dr. Abdulkadir Balıkçı, President of Executive Board of TENMAK, will deliver a talk at EE 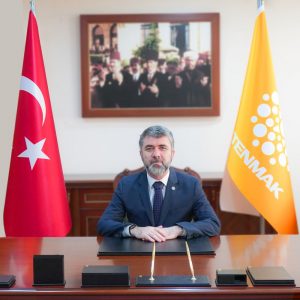 Prof. Dr. Abdulkadir Balıkçı, who is currently President of Executive Board (ECB) of Turkish Energy, Nuclear, and Mining Research Agency (TENMAK in Turkish) will give a talk, and share his valuable experiences in the field with the Istanbul Commerce University audience on December 22nd, 2021, Wednesday, between 9.00 a.m. – 11.00 a.m. at C-307, Kucukyali campus, focusing majorly on freshman students enrolled EEE101 – Introduction to Electrical-Electronics Engineering course.

Prof. Dr. Abdulkadir Balıkçı graduated from Gazi University in 1992. In 1993, he went to the United States with a Council of Higher Education (YÖK in Turkish) scholarship for master’s and doctoral education. He received his master’s degree in 1996 and his PhD. in 2003 from New York University Tandon School of Engineering (New York Polytechnic University) Department of Electrical and Computer Engineering. In 2004 Dr. Balıkçı returned to Turkey and started to work as a faculty member in the Department of Electronics Engineering at Gebze Technical University (Gebze Institute of Technology) where he is an active faculty member currently. Dr. Balıkçı worked as an electrical transmission systems Planning Engineer between 2000-2003 at New England – ISO company in the United States. From April 2014 to August 2020, he served as the Institute Director and Chairman of the TÜBİTAK Marmara Research Center Energy Institute. He continued his mission as the founding Institute Director and Chairman of the Board of this Institute until August 2020. He was appointed as the founding President of the Turkish Energy, Nuclear, and Mining Research Agency (TENMAK in Turkish) in August 2020 and as the President of the Institution and Chairman of the Executive Board in January 2021. Prof. Dr. Abdulkadir Balıkçı’s academic study areas can be listed as Lithium-Based Battery Management Systems, Energy Storage Technologies, Electric Vehicle Technologies, Electric Power Systems, Electric Machines, Power Electronics, Electromagnetic Launch Systems, and Renewable Energy Systems, etc. Dr. Balıkçı speaks English fluently, is married, and has three (3) children.

View all posts by eeweb