This week’s vocational seminar online lecture will be delivered on May 28th, 2020, at 10.30am, local time in Istanbul, in conjunction with other departments. In this week’s lecture, Ceren Küpeli, who is working as a Lawyer will give a talk about Personal Data Protection and Cybercrime. The link that is required for attending the lecture will be provided in the University official web site.

This week’s vocational seminar online lecture will be delivered on May 21st, 2020, at 10.30am, local time in Istanbul, in conjunction with other departments. The link that is required for attending the lecture is provided by the University officials via an email sent to official e-mail accounts.

İlker Toplu, who is currently working as a Regional Services Sales Director at Oracle will give a talk and share his valuable experiences in the field with Istanbul Commerce University audience on March 4th, 2020, Wednesday, between 10.00 a.m. – 12.00 p.m. at B-311, Kucukyali campus, focusing majorly on senior students enrolled GNL450 – Vocational Seminars course.

İlker Toplu is graduated from Işık University, Electronics Engineering in 2000 and then he completed his M.Sc. degree in Electronics Engineering at the same university in 2004. During his M.Sc. he also worked at Aria as a Network Surveillance Engineer and continued his career at Avea as a Network Support Engineer. Between 2006 and 2008, he worked at Ericsson as a Solution Manager. Later on, Toplu worked as Services Account Manager/Solution Consultant at Nokia Siemens Networks. Then he became Consultancy Sales Manager/Lead Solution Consultant at the same company. Currently, he is working as a Regional Services Sales Director at Oracle.

M. Salih Karakaşlı, who is currently working as a Solution Engineer at Huawei will give a talk and share his valuable experiences in the field with Istanbul Commerce University audience on February 26th, 2020, Wednesday, between 11.00 a.m. – 12.00 p.m. at B-311, Kucukyali campus, focusing majorly on senior students enrolled GNL450 – Vocational Seminars course.

Karakaşlı is a double major honor degree owner from both the Industrial and Computer Engineering Department at Istanbul Commerce University. After graduation, he started his career as an Assistant Software Engineer at Huawei and then continued his career as a Software Engineer. In 2018, Karakaşlı has been promoted to the Senior Solution Engineer position. In the meantime, he completed his M.Sc. at Istanbul University, Computer Engineering Department. Up until now, he has been awarded four different times by Huawei for his valuable contributions. Also, he developed a mobile app which is called “Hesap Tut” for android devices. Currently, he is working as a Solution Engineer at Huawei.

There will be a critical departmental meeting scheduled on February 27th, 2020 at 1.00 PM in Küçükyalı, B-312 focusing on both freshmen and sophomores. The meeting will gather both students and supervisors. It will include least but not limited to the following topics:

Attendance is required. Those who attend and volunteer will be considered for possible recruitment in tasks and projects of IEEE Turkey Section.

The second COM-101 activity organized by IEEE Student Branch at Tekirdag Namik Kemal University (TNKU) will be held in Istanbul on February 28th, 2020. The activity will host several important keynote speakers from industry, research and development organizations, and nation-wide associations. IEEE Turkey will be represented by Serhan Yarkan, IEEE Turkey Professional Develpment and Educational Activities Coordinator, with a brief talk. His talk will cover the importance of communication systems and technologies as well as future projections of IEEE Turkey. 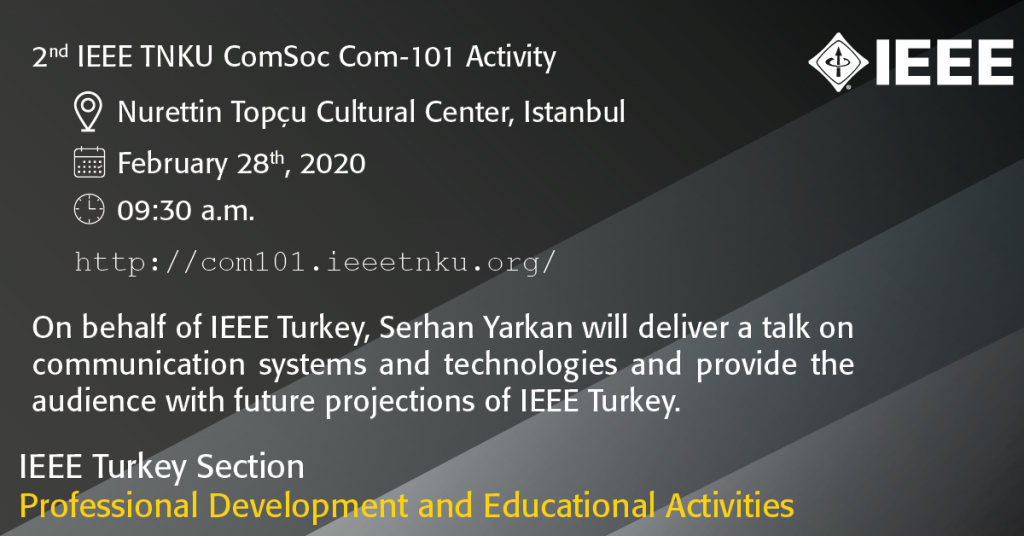 Sait Ergüven, who is currently working as a freelancer on planning and engineering of mobile communications and renewable energy applications, will give a talk and share his valuable experiences in the field with Istanbul Commerce University audience on February 19th, 2020, Wednesday, between 11.00am – 12.00pm at B-311, Kucukyali campus, focusing majorly on senior students enrolled GNL450 – Vocational Seminars course.

Ergüven graduated from Istanbul Technical University, Electronics and Telecommunication Engineering in 1978. After graduation, he started his career as a Chief Engineer at Turk Telekom. Between 1982-1994, Ergüven worked in the fields of telecommunication switching and transmission systems as an R&D Manager at NETAŞ. When Turkcell first initiated, he contributed to the construction of GSM network and designing of communication systems as a hands-on manager. Then, Ergüven held several directorial positions during his time on Turkcell. Later on, he worked as a senior director at the department of GSM Network Operation in AVEA. He continued his career as a consultant at TELENER between 2009-2012 in the fields of telecommunication network, IP systems and services, software tools for GSM network and new generation power application for GSM network. Currently, Ergüven is working as a freelancer on planning and engineering as a consultant.

The IEEE Turkey Student Branches Workshop takes place from February 5th – 9th at GSF Conference Hall, Dumlupınar University, Kütahya, Turkey. On behalf of IEEE Turkey, Professional Development and Educational Activities Coordinator Assoc. Prof. Serhan Yarkan attends the workshop and delivers the expectations of the contemporary vision of IEEE Turkey with a ten-minute speech on Feb. 8th, 2020. At the workshop, 204 IEEE Student Members, who are members of different societies, from 39 university student branches, will come together. The event includes 5 different parallel workshops for each society, ComSoc, CS, EMBS, RAS, WIE and 1 parallel workshop for the section as a whole.

Sezer Can Tokgöz, a former Tapir Lab. member, has advanced to candidacy of Ph.D. in EE Department at Texas A&M University at College Station, TX. As announced before, Sezer Can Tokgöz will be pursuing his Ph.D. studies along with Scott Miller and Khalid Qaraqe who are the two prominent researchers in the field of wireless communications and statistical signal processing. We would like to congratulate him and appreciate the effort he put in on the projects carried out in Tapir Lab. during his time in here.

İlker Toplu, who is currently... END_OF_DOCUMENT_TOKEN_TO_BE_REPLACED

There will be a critical... END_OF_DOCUMENT_TOKEN_TO_BE_REPLACED